Skip to content
Home > Java Features and Advantages > Why is Java Platform Independent?

Why is Java Platform Independent?

A programming language is said to be platform independent when a program or application written in it i.e. its source code can run on any operating system or platform, irrespective of where it was developed and compiled. We can define platform as the sum of hardware and software that provides an environment for the program to run. So, what makes Java Platform independent?

A program written in any language is in a human readable form. It may contain words, phrases etc which machines do not understand. For any source code to be understood by machines, it needs to be translated to a language understood by machines i.e. machine-level language. This is the job of a compiler, which converts the code written in high level language into a machine level language code. This code is either executed by the CPU directly or it may be an intermediate code that is interpreted by a virtual machine (as in case of Java). This intermediate representation in Java is in the form of Java Byte Code.

However, whenever a program is written in Java, the javac compiler compiles it and makes a .class file or the byte code. This byte code is not native to the machine (unlike C or C++ compiler) on which it has been created. It is a non-executable code which needs an interpreter to execute it on any machine. Once interpreted by an interpreter, the program or application can run and the desired output can be obtained on any platform or operating system. 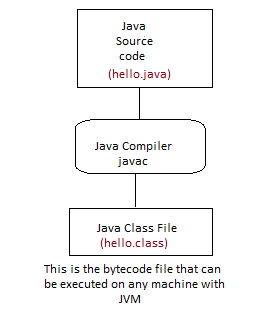 How is Java Platform Independent?

When you install JDK on your system, JVM also gets installed on your system automatically. For every operating system a separate JVM is available which is capable of reading any .class file or the byte code. So, whenever a .class file is created by our Java compiler, it can be read by any JVM on any operating system. Hence, Java language becomes platform independent and it is termed as portable software.