There are times when it is important for you to get input from users for execution of programs. To do this you need Java Reading Console Input Methods.

Now let us have a close look at these methods one by one.

This is the oldest technique in Java used for reading console input. This technique was first introduced in JDK 1.0. Using this technique we need to wrap InputStreamReader and System.in in the BufferedReader class.

This is done using the following syntax:

Using this will link the character based stream ‘br’ to the console for input through System.in.

NOTE: while using BufferedReader an IOException needs to be thrown else an error message will be shown at compile time.

Let us have a look at an example to make the concept clearer.

In this example, we will get a string of characters entered from the user. The program will display the characters one by one to the user on the screen. It will continue till the termination character is encountered in the string.

Here, when z is encountered in the string of characters, the program will stop displaying any further characters entered by the user. 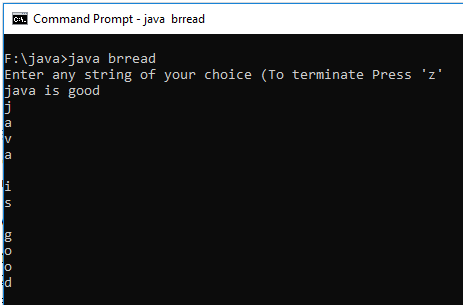 The Scanner also uses System.in and its syntax is as follows:

Some of the utility methods Scanner class provides are as follows:

Let us have a look at an example to understand the concept in a better way. In this example we will read numbers from a user and will find the sum of these numbers and display the result to him.

NOTE: – Whenever we use the next method, at run time it will always search for the input it defines. If such an input is not available then it will throw an exception. Hence, it is always beneficial to check the input beforehand by using the hasNext method before calling the next method.

This technique is best suited for reading input which does not require echoing of user input like reading user passwords. This technique reads user inputs without echoing the characters entered by the user.

The Console class is defined in the java.io class which needs to be imported before using the console class.

Let us consider an example.

NOTE: – The only drawback of this technique is that it works in interactive environments and it does not work in IDE.

In Java we can read console input in the three ways i.e. using BufferedReader class, Scanner class, and Console class in Java. Depending on which way you want to read user input, you can implement it in your programs.