Inheritance is one of the most important concepts of java programming, and it affects the way in which we design and write our java classes. It is through inheritance that a class can immediately inherit the properties of another class. Java Multilevel Hierarchy allows you to inherit properties of a grandparent in  a child class. 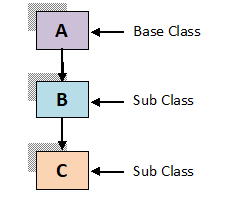 Java multilevel hierarchy is highly effective in implementing code reuse. It reduces programming efforts by using the predefined and pre-compiled classes. The readability of programs increases giving opportunity to a programmer to extend his code with additional features and methods on those offered by parent and grand parent classes. 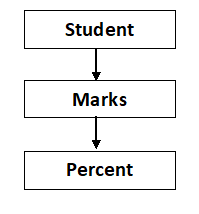 Let us understand it in the form of a program. The following program contains the above shown hierarchy.

Explanation of the above code

In the above program code, there are three classes forming Java Multilevel Hierarchy: student, marks and percent. The class student serves as the parent class for the derived class marks, which in turn serves as a parent class for the derived class percent. All the classes have a one to one relation. Marks class serves as the intermediates base class as it serves as a link between the classes’ student and percent. The chain so formed is known as the inheritance path.