Very often in programming you may need to execute a set of statements a specific number of times or until a condition is met. For this you can use PHP Looping Constructs.

While loop is the simplest among the three PHP looping constructs. The statement block given after the while keyword followed by condition in parenthesis is executed as long as the condition is true. The syntax of While loop is

while(condition expression)
{
Statements to be executed
Increment loop counter
}
While loop evaluates the Boolean expression given in parenthesis. If it evaluates to true then the set of statements are executed and the program control returns back to the condition. This is continued till the condition evaluates to false.  If you have one statement to execute multiple times, you may write it without the curly brackets before and after the block of statements.

This example program displays a table of 4 in your browser 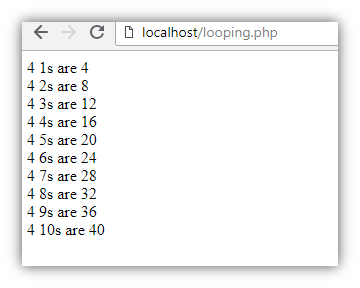 Do while PHP looping construct checks the condition after execution of block of statements. It means that even if the condition evaluates to false in the first iteration, the set of statements will execute once.  The syntax of PHP Do While loop is as follows

do
{
Statements to be executed
Increment loop counter
} while(condition expression);

This alternate process of execution and checking continues till the condition expression evaluates to false.  After this the statements after the loop is executed. 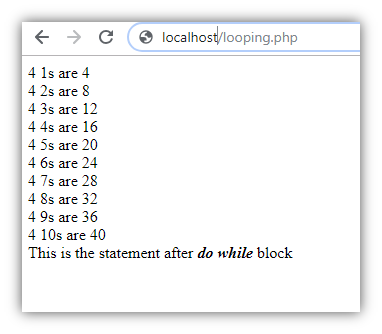 In a for loop first initialization of loop counter is done in the first part. Here a variable is assigned an initial value. The second part is the condition part that determines how many times the loop will execute. When one iteration is complete, the counter is incremented or decremented  (third part of for loop).

After increment or decrement of counter it is tested for condition. If the second part of for header evaluates to false the loop terminates.  If it is true the block of statements are executed again. Remember the first part( initialization) is never executed again. 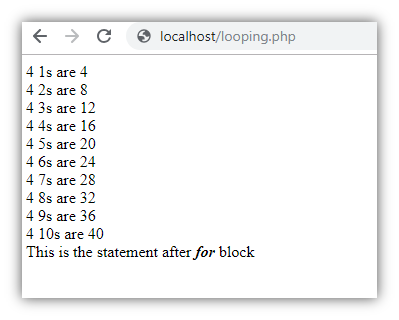 Help us in doing the good work. Please contribute a small amount that you can spare. Remember it will keep us afloat and help this website going. Please feel free to suggest some interesting topics that you want to learn about in the future.