In implementation of objects and people as entities, attribute of one entity type may associate with attribute of another entity type. These associations are called Relationships in ER Models. In other words any relation between two entities which associates each other is called relationship. For example, there are two entities Employee and Department. An employee works in a department. Here Employee and Department are entities and works for is the relationship. 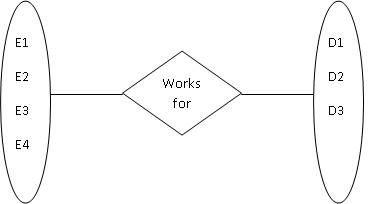 Types of Relationships in ER Models 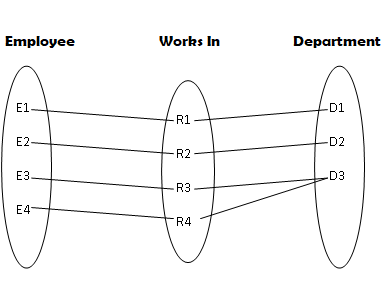 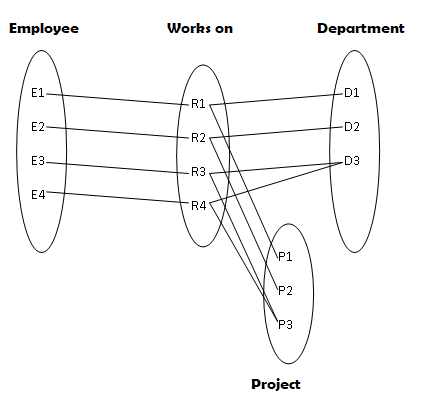 Role names can be same as the entity name but sometimes same entity plays different role in a relationship. For example, an employee in an organization can be a Supervisor of one employee and at the same time she is the Subordinate of another employee. So, if we have a relationship Manages or Supervises in this relationship, employee entity is playing the role of Supervisor and also of Supervisee. In these kinds of relations it becomes necessary to give different role names to entities.

Constraints on Relationships in ER Models

To implement the real world dependencies, Relationships in ER Models can be defined with limit on the associations of entities in a relationship set. We can identify two types of relationship constraints: Cardinality ratio and Participation.

When one entity in an entity set have association with at most one entity in another entity set. We can say that for each entity in first entity set there exists one or zero entity in the second entity set. For example, in a university every department can have only one Head of Department. Here at most is important since it means that there can be entities that are not related to any other entity. Like there can be some new Professors who only teach and do not manage any Academic Department of university.

Participation in Relationships in ER Models  are limited by constraints. It is a technique to specify existential dependency of one entity upon another entity via the relationship type. Through this an ER diagram designer can specify the minimum count of relationship instances through which the entities are associated. It is defined as minimum cardinality constraint.