Database is built on a well defined structure called a data model. Data models are characterized by providing the ability to create data items. It additionally allows defining relationships between data items, semantics of data, rules, constraints and other attributes of data.  More specifically we can say that a data model is a technique of defining organization, storage and retrieval mechanism in a database.

It can also be described as a conceptual tool to describe the data, the relationship between data, semantics and integrity constraints.

There are two basis of data models

An Entity is anything which exists or happens. It can be an object, individual, event or process. It is anything about which we need to collect and manage the data. Any specific member of the entity set is called an entity instance. For example a “Customer” is an entity about which the sales department wants to collect data. “James” is one of the customers and is an entity instance. “Order” is another entity in the same environment.

There are three models based on records- Hierarchical, Network and Relational.

When files system posed the issues of inconsistency, data dependence and inflexibility, hierarchical data model came into existence. The name is given because the records are arranged in a tree like structure.

The parent records in hierarchy store the address of all the child records using the pointers. A parent record can have many child records but a child record will be related to only one parent. The records at same level of hierarchy cannot have any connectivity. Users could locate a specific record by following the hierarchy starting from root record. Hierarchical model allows only 1:N relationship among entities. 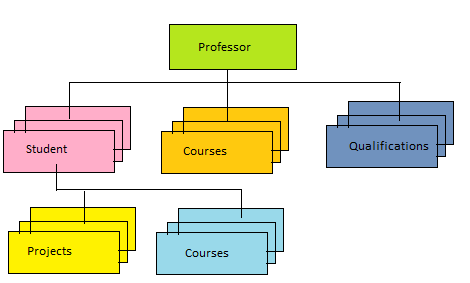 In the above example the “Professor” Record is root record and it is related to three records “Student”, “Courses” and “Qualifications”. Its child record “Student” is related to “Projects” and “Courses” records. Here the “courses” record exists twice in the model since there can’t be any other relationship than parent and child. 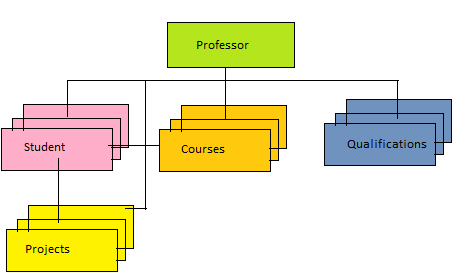 Here the records “Professor” and “Student” share the “Courses” and “Projects” records then giving a M:N relationship.

Relational Model was proposed by E F Codd. It gives an efficient and simple data model in comparison to Network and Hierarchical data models.